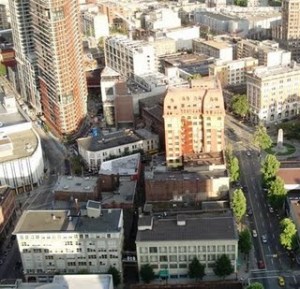 Last night I dreamt of a city I have only ever visited in my dreams, and it made me remember a dream I had a few years ago. I know I have a fuller account of it somewhere, but this all I could find right now:

“Last night I travelled the world photographing beautiful mindful contradictions until I got lost in an Alice in Wonderland-esque hotel, which I stumbled upon after crossing a dam somewhere in Germany”. The hotel was the most memorable part of that dream, with each room a different hue of orange.  It was ethereal and vivid all at once.

The city in last night’s dream was a beautiful juxtaposition of a modern North American city built around ruins – hotel courtyards with corridors leading to rooms built entirely of tile and gold inlay, abandoned and dusty, these rooms were forgotten spaces within the city, spaces that were passed by dozens of people every day but rarely noticed.

Ruins as ‘fragmentary remains’, can be used “to piece together conflicting visions of the city by making unexpected connections between sites of past- and present-day ruin” (The Miss Guides).

View all posts by Natalie Ethier